Last month Creative Wiltshire hosted an outreach event at the Beeches Community Centre, Bulford Camp on Salisbury Plain. The event was held two parts, a two day workshop split over two consecutive Mondays, conducted by Bill Crumbleholme and ably assisted by his colleague Mark Vyvyan-penney. I attended in my Creative Wiltshire capacity, but was lucky enough to have a go myself.

In the morning of the first session our families became familiar with Bronze Age Beaker pots. Beakers are archetypal drinking vessels, with a belly, waist and flared lip, giving a pleasing shape that is comfortable to hold. Decoration comes courtesy of a comb or other item such as bone which is pressed into the damp clay to decorate the pot with repetitive patterns of herringbones, zigzags, lozenges and triangles. Some are decorated by impressing rope or cord into the clay.

Everyone had a go at making a few, with our third attempts often looking vastly superior to our first! I also introduced the attendees to the work of Wiltshire potters, showing that a number have drawn inspiration not just from the landscape, but also from the historic use of the craft. Katharine Pleydell-Bouverie in particular used the combing techniques and loved the earthy shape and texture of pots which she wanted to be of practical use too, which of course they were for the Beaker folk! The afternoon became harder, with a different type of clay used for the pots, one which was more difficult to mould. Our novice potters had fun, though, producing many different styles and size of pots, and it was this sheer variety which impressed me most. From traditional pots to tea pots; from animals to fine ware, the creativity of everyone was wonderful to see, and different personalities could definitely be gleaned from the various pottery styles.

Just some of the varied styles!

The morning pots went to Bill’s kiln, the results being picked up by excited attendees the following week. The afternoon session’s pots were left to dry over the forthcoming week ready for the next exiting instalment!

Week two began with a look at prehistoric metalwork, Mark talking to us about the development of the technology and showing us some replica swords and other metal items. Everyone got a couple of square tiles to etch out which were to become the moulds for the molten metal to be poured into. Many of us were unsure about how our items would look but we needn’t have worried as the results were amazing! Whilst we were occupied with our moulds, Bill was getting the bonfire going which was to take last week’s pots. The weather was a little showery, but shelter had been provided and the trees in the grove also helped.

The pots were placed into the centre of the bonfire which was built up around them to ensure the drying process was even. Whilst Bill attended the fire (the smoke being a hazard the attendees gallantly worked through!) Mark began melting metal on his smaller fire using a hand held bellows. We were excited to see the metal being poured into the mould first-hand and were able to break the moulds open revealing our newly created treasures. Then came the ‘big burn’ when Bill got the bonfire roaring to finish the bonfire kiln process – what a day! 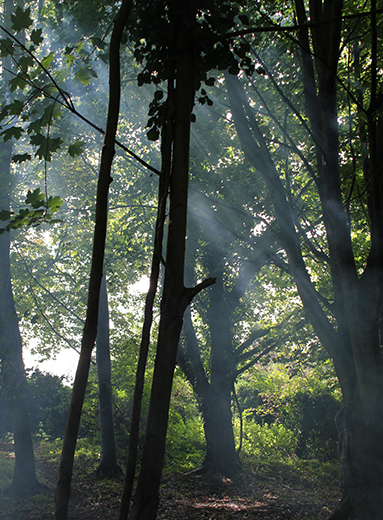 Our families had a great time being inspired by ceramics, getting hands-on with clay and hunting for wood for the bonfire in the glade to help create the final part of the pottery experience. Comments included:

“Creative historic fun”, “I have seen a different side of my children and they have enjoyed it so much”, “Awesome, dude”…

“We would love to do it again, we had a brilliant time”,

Here’s hoping we can…

To find out more about Bill and his pottery please visit the Beaker Folk website.