Swindon Museum and Art Gallery is delighted to have acquired two editioned prints by the artist Joe Tilson. Tilson is well known as an important modern British artist, especially for his involvement with Pop Art. Less well known is the time he spent living and working in Wiltshire.

Following National service, Tilson studied art at St Martins’ and the Royal College of Art in the early 1950s. He received the Rome Prize in 1955 and spent two years living and working in Italy. On his return, he taught art in the UK, Germany and the United States.

Tilson and his family moved to Christian Malford in Wiltshire in the early 1970s. The Wiltshire landscape and rural lifestyle had an impact on his art. As well as making many editioned works using screen printing techniques, wood  became an important material for creating relief works. 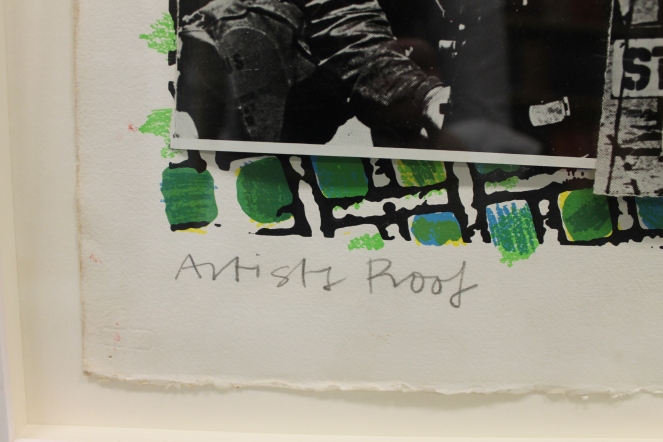 Joe Tilson had been a significant gap in Swindon’s collection for many years. Swindon holds a set of four engraved portraits by Frank Auerbach showing his friends and fellow artists Lucien Freud, RB Kitaj, Leon Kossoff and Joe Tilson. The other three artists are represented in our collection but Tilson was not. Acquiring Joe Tilson’s work through the Creative Wiltshire project was an exciting opportunity.

Two prints were selected following discussions between the Creative Wiltshire team and staff at Swindon Museum and Art Gallery. They now form part of Swindon’s Collection of Modern British Art.

Let a Thousand Parks Bloom dates from 1971 and was made in response to the Vietnam War and student protests in the United States The large print shows a grid along with photographs of a chain link fence, a crashing helicopter and the protests at the University of Berkeley in California. At the top of the print is the work’s title, which appears as if dragged through the air by a helicopter. The work is infused with the spirit of protest and optimism and shows how artists attempted to depict the tumultuous times they lived in.

Moon Signatures, from 1975, is a smaller printed work combining cool celadon green with applied gold leaf. The work depicts Greek lettering, stencilled plants and the moon. It shows his interest in classical mythology and BIHFI at this point in his career.

Tilson was elected Royal Academician in 1991 and nowadays lives and works in London and Cortona, Tuscany. Jocelyn Tilson was married to Joe during this time. She is an important ceramicist, and her lidded vessel is in Swindon’s collection of modern studio ceramics.

‘From Where I’m Standing’ features Moon Signatures by Joe Tilson and the exhibition runs until 28th January 2017 at Swindon Museum and Art Gallery.