Nancy Nicholson (1899-1977) was a painter and fabric designer with a flair for interior design and we are thrilled to have found and purchased an example of her work. Her Wiltshire connection is with Sutton Veny where she lived in the late 1920s and early 1930s. She established Poulk Prints in 1929, of which this fabric is an example, and then later re-named it the Poulk Press which printed fabric and paper in limited numbers. She also undertook graphic design work and contributed illustrations to books like “The Owl” which had captions by Robert Graves. 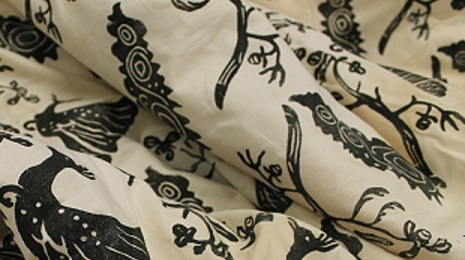 Her artistic background was influenced by her father, William Nicholson, also resident in Sutton Veny for part of his life at the ‘White House,’ and her mother, Mabel Pryde who died of Spanish Flu when Nancy was young; the parents said of their children that “making art was like breathing” for them. Nancy’s brother Ben was a sculptor and her other brother, Christopher, an architect so there was a strong artistic background to this family. Sadly, her other brother, Anthony, was killed in World War I. The family connections with like-minded people may have had an influence on Nancy; regular visitors to the family home included Thomas Hardy, Wilfred Owen, Siegfried Sassoon, T.E. Lawrence, as well as the young Christopher Wood and many gave financial support to Nancy, her husband and children.

In 1918 Nancy married the poet Robert Graves with whom she had four children. She had developed strong feminist views and was extremely open-minded, later accepting a triangular marriage and allowing Laura Riding to live with herself and Graves in London. She eventually divorced him in 1949, but by that time had also lived with Geoffrey Taylor in the late 1920s and 1930s, in a timber house she had designed herself and built with the help of family labour. This house was near Sutton Veny in Wiltshire and it was at this time that she worked with her brother, Ben and his wife, Barbara Hepworth. They produced pieces that were typical of contemporary design with a modern appearance, fresh and stylized often with an abstract feel. Nancy’s flair for decoration, architecture and skill as a graphic artist are evident, she often thought of ‘her scissors as her brush’ and this can be seen in the textiles we have purchased, illustrating a skill for stencil cutting shown in this simple one colour print. The design of a black bird and foliage on natural coloured cotton typifies Nancy’s work at the time she was in Wiltshire. In fact, the design looks so fresh it would work well today and has received some admiring glances from our colleagues. At the moment the textiles are made into a pair of curtains; after conservation work they will be placed in the collection at Salisbury Museum and exhibited as part of Creative Wiltshire.

4 thoughts on ““her scissors as her brush” – Nancy Nicholson textiles”

Carole Bent : Creative Catalyst’s Commitment to Creativity in its widest sense : From Wiltshire to the World