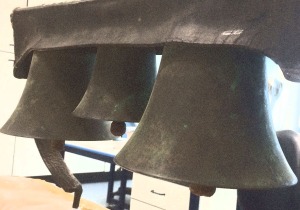 Creativity covers many different disciplines and it is fitting in Wiltshire that we consider items with a link to our agricultural heritage. Many of our ancestors working in this county are fondly referred to as ‘ag labs’ by the people researching them…..so we are hoping to find something that will fit within the parameters of our ‘Creative Wiltshire’ project to reflect this trade and occupation. We have already come across a number of blacksmiths working in the traditional way but it is also worth noting that an offshoot of those skills and an industry that features in our county’s past is the bell foundry business. Aldbourne in particular developed a reputation for bell founding, perhaps because of its geographical location in a basin making it ideal for tuning; and also the trade of the gunsmith, often closely linked with bell founding. Gun metal is composed of bronze alloys, 88% copper, 10% tin and 2% zinc and bell metal in the 18th and 19th centuries was also composed of a bronze alloy, 78% copper, 20% tin and 2% zinc, so a similarity in the type of metals used. Bell metal needs to be harder; hence the greater amount of tin. It is quite likely that one industry became an offshoot of the other, particularly if the need for guns diminished, as it may have done after the civil war. 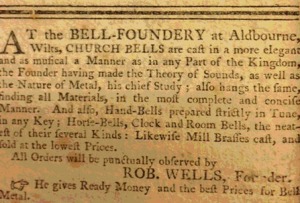 Advertisement from the Marlborough Journal

The Corr family and later the Wells family are connected with this industry in Aldbourne and it came to our attention that three bells by Robert Wells were coming up for auction in the USA. This lot consisted of three bells mounted horizontally on a metal leather-covered frame and are the type of bells that would have been placed on animals, such as horses or oxen, to warn of their approach. Having authenticated the items we made a successful bid knowing that we could place them in Pewsey Heritage Centre, a fitting location as it is housed in an old foundry building that was once home to Whatley and Hosier, a water and agricultural engineering firm. 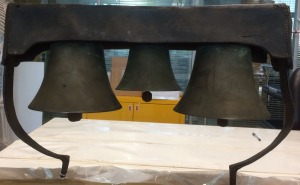 Robert Wells, the bell maker, was born in 1725 and he founded Wells foundry in 1755. His father William, a farmer, had already purchased Smith’s Forge in 1720 from John Looker who had been casting small bells. While William continued to buy land and property and continued farming, his son Robert began to found bells; the main foundry was at Bell Court, another was at Court House and other sites were used as well. By 1781 Robert had retired, leaving his sons Robert and later James to run the business until 1825, when unfortunately the business went bankrupt; it was later sold to Thomas Mears of the Whitechapel foundry. 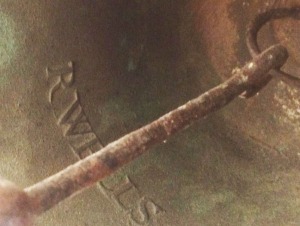 Of the bells we have purchased you may notice the initials of the bell maker ‘RW’ stamped on the inside of the bell itself – this dates that particular bell between 1755 and 1825. One of the other two bells has the full name ‘Robert Wells’ inscribed. It would be lovely to think of the bells being worn by horses or oxen while going about their work in the Wiltshire countryside. We are indebted to Terry Gilligan for his knowledge and advice in helping us decide to purchase such a functional item and have found his book ‘Aldbourne : The home of the Hand Bell and Crotal Bell’ particularly useful. We are very pleased with our recent acquisition and intend to have a little conservation work done in order to clean the metal and treat the leather before the bells are moved to Pewsey Heritage Centre where they will then go on display. The fact they have now returned to Wiltshire seems particularly fitting and it is also of interest that there are two bells in the local church also made by Robert Wells and dating from 1787, one has the following inscription ‘music and ringing we like so well and for that reason we gave this bell.’