The Arts in Wiltshire

Ok, so I am being rather unfair to simplify Market Songs, my site specific a capella vocal installation, which opened this year’s Ageas Salisbury International Arts Festival, in such a way, but when faced with creating such a colossal and complicated work the most practical thing to do was to simplify exactly what the work had to be, before getting into the artistic nitty gritty. 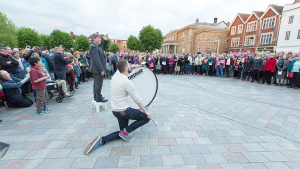 The starting point (and finishing point!) was the city’s market square. Infamous throughout history – including recent history – it seemed a location rich in potential. I delved into the history books locating rules, regulations, orders and bye-laws, which, alongside the poetry of Wiltshire poet…