It’s great to hear about the creative work you’re up to in Swindon! 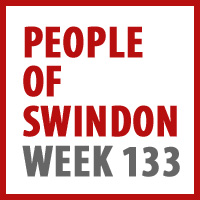 “The arty people of Swindon are re-drawing, re-sculpting and re-imagining their town.”

Hi! My name’s Ben and I’m dangerously into arty, creative stuff. Music, theatre, film, sculpture… You name it, I’ve probably tripped up a curb while daydreaming about it.

I originally come from the North and moved to Swindon with my wife around a year ago for work. Prior to that we had been based in Manchester while I was studying for a BMus degree at the university and interning.

I assume like many of us moving to Swindon for the first time, I did so with mixed emotions. For one reason or another I was expecting some kind of grey, culturally baron wasteland. Fortunately, when I got here and started looking around that just wasn’t the case. I found a fantastic and dynamic community of creative people that are passionate about their town and genuinely want to change…

Caroline Day – Spirituality in the Landscape