The combination of creativity and the instinct of an artist with a deep knowledge of human and animal behaviour; this is how Martina Challis introduces Desmond Morris to us in ‘The Artistic Ape: three million years of art’ by Desmond Morris. We have purchased this as part of our creative Wiltshire project to acknowledge the massive contribution that Desmond Morris has made to our creative world.

Primarily we tend to associate him with ‘The Naked Ape’ and the subsequent publicity and interest that this generated, but he is also an accomplished surrealist painter so it seems appropriate to purchase ‘The Secret Surrealist. The paintings of Desmond Morris’ as well. 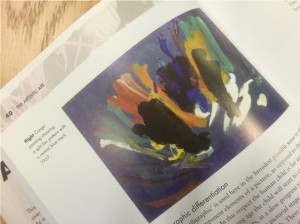 Painting by Congo in 1957; a male chimpanzee, observed and encouraged by Desmond Morris as part of his research.

Desmond Morris was born in Purton, near Swindon in 1928 and moved into Swindon in 1933 where he stayed until 1951. His grandfather was William Morris, founder of the local newspaper and a Victorian naturalist, and no doubt, an influence on Desmond who developed a strong interest in writing and natural history. While attending Dauntsey’s School in West Lavington his fascination with zoology grew, alongside a strong interest in the visual arts.

His first one man exhibition of paintings was held at the Swindon Arts centre in 1948 just before he enrolled at Birmingham University to study zoology. Many exhibitions have followed including 1976 and 1993 retrospectives also held in Swindon.

The 1948 exhibition totalled 89 paintings, 53 of which were later destroyed but the remaining set a theme that recurred over the following forty years. This theme concentrated on biomorphs in an empty landscape, often in groups and lying, standing or floating within that landscape. Sometimes linear techniques were employed or rough surfaces giving the impression of a more primitive art form, perhaps like a rough stone surface such as a cave wall. As a contrast some were portrayed in flat colour and occasionally some became even more three dimensional.

These early paintings are tantalising, giving a glimpse of what is yet to come from a wonderful enquiring mind.

In an article in the Observer magazine in 1971 published by Desmond Morris he describes himself as a ‘private painter’ (for ‘those who like labels’) but also stresses that people today are ‘explorers….painting is no longer merely a craft, it is a form of personal research’…..

So back to our research and as we dig deeper to form the foundation of our collections policy in the next few years it is truly inspiring to gain an insight into how the creator works and how many connecting themes there are to their output. Desmond Morris has fuelled that interest and we feel he is an inspiration to our project.