It is not only the amazing Wiltshire landscape which helps produce creativity; as our research progresses, we are discovering just how much creative people across the county provide inspiration and support to each other.

A case in kind is the Swindon born artist Ken White who, like the ‘Hammerman’ poet Alfred Williams before him, started out at the GWR railway works aged 15. He became a sign writer in the carriage and wagon works but was persuaded by Rick Davies (by now well known to you all as a member of Supertramp) and Ray O’Sullivan, against his parents wishes, to enrol in a full time court at Swindon Art school after taking O and A ‘level art at evening class.

After the paint and pharmaceutical company Bayer featured one of Ken’s murals in a poster advertising campaign he became famous for designing the red lady on Virgin Atlantic planes as Richard Branson’s retained artist. His reputation then grew with commissions from organisations such as Madame Tussauds. His paintings are now in art collections throughout the world including the USA and Canada.

Ken has created paintings inspired by his time at the GWR works, but his work is at its most obvious on the walls of Swindon’s buildings. Some, like the mural in Prospect Place have now disappeared, now only visible through photographs such as this one in the Local Studies Collection at Swindon Central Library. 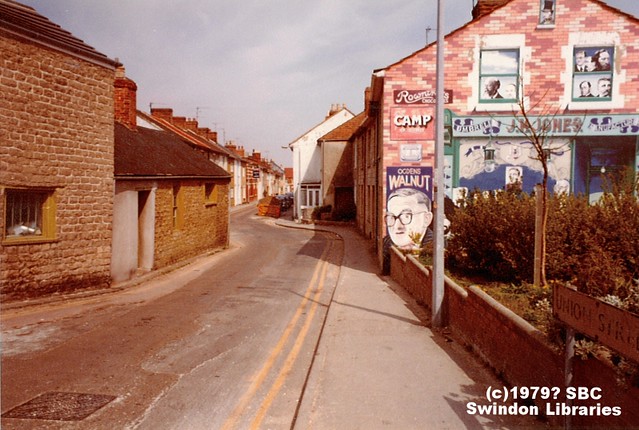 Other murals, like the Golden Lion Bridge mural in Fleming Way can still be enjoyed by all.